Much googling (and duckduckgoing) yielded absolutely nothing useful – plenty of block diagrams with an n-mosfet in the Cuk synchronous rectifier position, and even one circuit with a p-mosfet, but not a single clue as to how the gates are driven – except one stray mention that it has to be done capacitively.

I had tried to design this before, and rapidly realised why so few Cuk converters have synchronous rectifiers. This time, I had a really good go, and what follows might be a couple of possibilities.

Caveat: all the following could be rubbish, as I have not breadboarded any of it yet.

Using an n-channel mosfet is favourite as the on-resistance times input capacitance figure-of-merit is always better than with p-channels.

But with an n-channel, the source is going to be going up and down like a sewing machine between (in my case) +0.6V (when it needs to be turned on, after which it will drop to ~0V), and -2.9V minus the ripple on the output inductor, when it needs to be off.

This means the gate voltage has to chase the source in the negative direction very quickly to keep the mosfet turned off after it has initially turn-off. 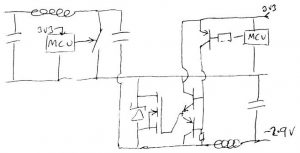 I can hear people shouting ‘bootstrap’, but short of that, my attempt is on the right here.

It would need a n-mosfet with a 2.5V gate, and the idea is that the MCU pulls the base of the upper pnp low to turn the rectifier mosfet on, which will be commanded nanoseconds after the MCU has turned the main switch mosfet off (the main switch mosfet is shown as a switch in the diagram).

Around that time, the source of the rectifier mosfet will be at 0.6V (see elsewhere for how the Cuk converter works), so pulling its gate up to 2.7V (3.3V-Vbe) will turn the mosfet on, pulling its source to ~0V and cementing the ‘on’ state.

Turning it off is much more sketchy, I think.

The MCU will let go of the upper pnp base nanoseconds before the main switch mosfet is turned on, so base drive to the npn emitter follower will be disappearing (if the MCU gets the timing right).

When the main switch comes on, the negative end of the link capacitor will shoot to -2.9V minus the output inductor ripple (such is the action of Cuk converters) and that should pull on the pnp emitter follower and properly turn off the rectifier mosfet.

The bonus nice thing about this circuit would be that power dissipation in the resistor, which has to be of a low value to be fast enough, is only from 3.3V, and not from 3.3V+2.9V+ripple. 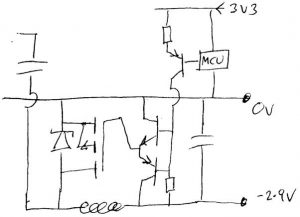 Despite being a ‘worse’ mosfet, the circuit I have dreamed up for the p-mosfet circuit looks a little more sane, with a more conventional dual emitter follower circuit powered from the -2.9V output – again it would need a mosfet that works with 2.5V on its gate.

Drive comes via the upper pnp emitter follower, which acts as a switchable constant current source (all very speedy and grown-up).

The MCU sets its output low to turn the mosfet off – via turning on the upper pnp follower and the npn follower.

To turn the mosfet on, the MCU sets its output high, which turns off the upper pnp emitter follower. With no current flowing down to the bases, the npn follower turns off, releasing the mosfet gate and, at the same time, allowing the lower resistor to pull on the lower pnp follower which turns the mosfet on by pulling its gate to -2.3V (-2.9V+Vbe).

A drawback is that the two resistors are sinking power from 3.3V+2.9V all the time the transistor is off, although in a step-down Cuk this not for much of the cycle.