In 2019, the team demonstrated an externally-powered layered piezoelectric flexing cockroach-sized mini-machine that could scurry forwards at 20 body lengths per second (~1.5mph). Part of its secret is that it is driven at its resonant frequency.

To this have been added two electrostatic footpads, on one each side, that can stick that side to the surface below and cause the machine to turn quickly – there is a video of the 65mg robot zig-zagging through a Lego maze in seconds.

“Our original robot could move very, very fast, but we could not really control whether the robot went left or right, and a lot of the time it would move randomly, because if there was a slight difference in the manufacturing process – if the robot was not symmetrical – it would veer to one side,” said Engineering professor Liwei Lin. “In this work, the major innovation was adding these footpads that allow it to make fast turns.”

It can also be stepped on and remain undamaged.

This proof-of-concept tethered version (above) receives power for flexing and gripping thorough an umbilical cable. 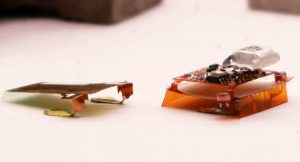 Building on this, an untethered version had ben made (right side of image left) that carries its own battery and a gas sensor and can run for 19 minutes and travel 31 metres.

Weighing 240mg, it carries a 1.7g payload (including control circuit, battery and photoresistors the sensor weighs 180mg) and travelled a 280mm S-course in 37s.

“With larger-scale robots, you can include a big battery and a control system, no problem,” said Lin. “But when you try to shrink everything down to a smaller and smaller scale, the weight of those elements become difficult for the robot to carry and the robot generally moves very slowly. Our robot is fast, quite strong, and requires very little power, allowing it to carry sensors and electronics while also carrying a battery.”

The maze traversing video is here, and is worth a look.