Bio-engineered fibre ‘stronger and tougher than some natural spider silks’


Lead by professor Fuzhong Zhang, the team was aiming to create a protein that forms ‘β-nanocrystals’, a significant component of natural spider silk.

The university team designed a protein molecule that includes amyloid sequences – which have a tendency to form β-nanocrystals – and less repetitive amino acid sequences than spider silk to make them easier for engineered bacteria to make. 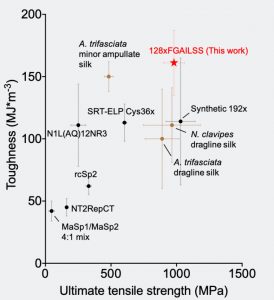